Why this year’s IWD is the most important ever 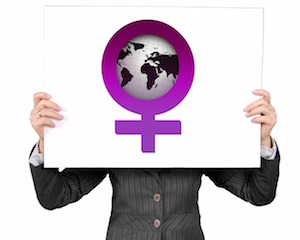 I became a feminist at the age of 15 when I was treated to a sudden and shocking political awakening. I left the Canberra Girls Grammar School and went to the School Without Walls (SWOW). There I met communists, feminists, and openly gay men and women for the first time in my life.

I won’t say my sheltered life. No life, no matter how financially privileged (as mine certainly was), protects a woman from the impact of sexism, misogyny and abuse. I have had my share.

But my year at SWOW equipped me with a political framework that helped me resist most (not all) of the powerful forces that impel us to internalise our community’s agreement to oppress women. Almost.

Some areas are hard to throw off. I still feel self-conscious whenever I am not slim enough to be considered “attractive”. As my daughter once shared with me, “I always thought my mum was the most beautiful, intelligent woman in the world until she told me she was fat, stupid and ugly.” Sorry, darling. And thank you.

The #metoo movement and the incredible work of anti-family violence campaigner, Rosie Batty, together with feminists everywhere, have helped build the campaign for women’s equality to an extraordinary momentum.

Men are being challenged to own up to their oppressive behaviour and to feel ashamed of what they have done. Good.

But I can see a potential threat to the value of 2019’s feminist momentum.

I’m a big fan of the ABC Radio podcast, “All in the Mind”, hosted by Lynne Malcolm. Malcolm recently interviewed the author, Joseph Burgo, on the topic of shame (also the name of his most recent book). He explains that shame, despite its many downsides, is a tool of social evolution. It is used by societies to control socially unexpected behaviour. Finally, in 2019, this includes oppressing and abusing women.

However, Burgo pointed out a risk. “In the history of shame as a social influence, it has almost always been used with the idea that there is an end to it, and if you express remorse and then conform to the societal expectation you will be welcomed back into the fold. I think that’s how shame can be the most effective, when it’s not vindictive and when it contains the possibility of forgiveness.”

No remorse, no forgiveness

So let’s not turn the feminist tide into a witch hunt. I’ve been guilty of this. I’ve felt pretty callous about the potential of collateral damage to men. After all, women have suffered plenty of damage; why should we care if some men are accused of unjustly or hounded in the workplace?

I’ve been challenged to wake up. If we want women to be safe at work, we must make it also safe for men. I don’t mean cover-ups. I don’t mean closing ranks. I mean transparency in our processes.

The guilty verdict imposed upon George Pell is a good example. I am proud that Australia has the courage to hold such a powerful man accountable and bring him to justice. We all got to see the process (within reason) and he was given access to defence.

But I’ve also heard tell of political fundamentalism sweeping through the leadership in family violence and men’s behaviour change – an attitude that is vindictive, narrow and unjust.

Can I prove it? No. I am just an ordinary feminist with a mind of my own who doesn’t want to see the power of 2019’s feminist movement squandered because we are too afraid to call out injustice when we see it.

Of course, for men to be forgiven their systematic discrimination and abuse and violence against women, they must recognise it in themselves and express remorse.

Again, we find an example in George Pell’s lawyer, Robert Richter, who was howled down for making disgusting public comments about his client’s crimes. He apologised completely. He showed remorse convincingly. And, as much as one part of me wants to punish him further, I can’t condone my own feelings.

Let’s keep our focus on getting men to show remorse when their behaviour doesn’t support women’s equality and then welcome them back to what must become a better society for the change.

Want to get started on your book today?
Download the Ultimate Cheatsheet to Get Your Book Started.